Mid september , with five other friends from France ( Florian) and Switzerland ( Giulia, Roman, Pascal and Fränzi), we all met late in the night in Tbilissi ( Georgia). This country is a really small country stuck between Russia and Turkey and between  two seas : the black sea to the west and the Caspian sea to the east. Early in the morning ( only 3/4 hours sleep later we jumped in a small minibus which drove us until Mestia, one of the main mountaineering village of this country. This village receives different valleys surrounded by a couples of 5000 and loads of 4000 summits.

The day after, an offroad car grabbed us with our 25/30 kg bagpacks filled up by 7 days of food, tents, sleepings bags and all the mountaineering gear. On the 15th of october we started from the village of Adishi (2120 meters) with the aim to gain the summit of Tetnuldi 2 days later and depending of what we will see attempt an other summit in the other neighbooring valley ( it will appears that the access of those extra summit were too tough for the gear we brought and we only made Tetnuldi).  After 2 hours we were at the altitude of about 2900m and began the building of the tents under the rain ( as it will be quite usual on this trip !). The night was foggy but the general mood really good !

We woke up with a nice warm weather and the usual good mood you have when starting up a new adventure ! The sun gave us a couple of hours rests which will be broken at the pass. On this pass  we left part of our gear and food expecting to use them on our way back to attemps an other summit. The deposit was done at  around 3200m. We met a group of russians who spent 6 days up in the mountain and their last night trying to slep at 4300 m a.s.l. in an emmergency snowcave on the ridge of Tetnuldi. The way up was in good condition but the rain and snow began to disturb us and when we arrived at 3700 m on the biwak , we settled our tent in the snow storm. The rest of the afternoon was spent sleeping and recovering forces before the next day which shall be sunny according to weather forecast.

We slept well but the early alarm clock remained tough at 2.30 am. -4°C in the tent during the clear sky night, -15 °C outside. Luckily we charged our battery earlier the day before.

The wind is cold and the meal is quickly sent. Rope teams are formed ( Giulia, Florian and Pascal/ Fränzi, Roman and me). We quickly stepped on the glacier and went quite fast at the foot of a 40/45 degrees ice slope. luckily this was snow covered. Our machines ( Pascal and Roman) sent the 2/3 pitches faster than the ligth and the breath was obviouly influenced by altitude but still really good. A second steep wall ( 35/40) was passed easily during the long traverse. at sun rise, we made a food and drink gathering (4100m) enjoying the view over Ushba and Elbrus. This was so magnifiscent !! However the cold made us quickly start again !

From around 4500m I actually felt strongly the altitude through my heart pumping like mad and almost hurting me if I walked too fast… Florian also felt it but some before…  at around 11 am we reached the altitude of 4750m, our hiking rate was slow and even if the summit was really near ( The main difficulties were already passed and summit at 4850m). The steep snow slope falling down into the valley was heaten by the sun and we feared to get bad conditions on our way back (sliding melt snow). Even if some of the group could have run up in a minute, we all agreed not to split the rope team and began our descent. This was like an evidence and I think it was wise as this was our first summit all together. Indeed it is mountain ! Moreover the most interesting part of the climb was completed and security comes always first. The path is far more important than the goal itself and summits are there for a long time !  Anyway the landscape was awesome on the way back and the ascent was indeed demanding if you consider the level it is supposed to be ( PD+). Our bad (inexistent) acclimation at those altitude was for sure the main reason of our small faillure… Our legs felt good but the breathing and the heart didn’t follow.

After climbing down and rappeling on Abalakov, we reached the camp in the middle of the afternoon and went quite quickly into bed. 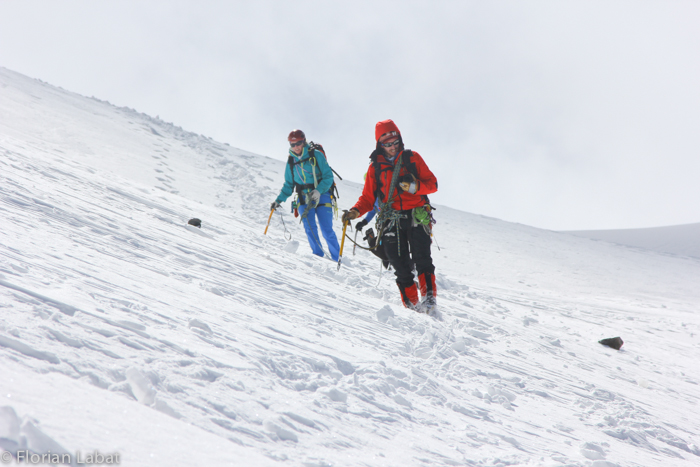 The clouds came with our dreams and 10 hours later we woke up in snowstorm… but we had to leave… so after less than an hour we reached our deposit place and took again our food and extra gear. On the way back we reached our driver by cellphone and the appointment was set  for an hour later. Georgians are such connected people !

This is the first post among a serie about georgia.

Hi,
could You please give a picture of your route. for example on the last photo(Tetnuldi after our ascent by Florian Labat) show Yours route.

Regards,
I want to go there this year 🙂

Hi !
Picture sent !
We climbed on the very left of the picture ( even out of it) then foollowed the snow flange that draws in the middle from left to right. and then on the ridge.
Good luck !

Thanks for sharing these pictures! They confirm that the mountain and the region is as beautiful as we thought :)!

Would it be possible to send me the same picture that Marcin asked you before?
We would like to make an attempt as well in august! 🙂 Could you send it to toondekeyser@gmail.com Thanks!